The Salome dance craze marked a critical moment in the theatrical representation of female sexuality. Arriving in the United States from Europe in 1907-1908, the dance enticed audiences with its high art pedigree, cooch-like choreography, scantily clad performers, grotesque depiction of sexual desire, and references to “deviant” sexual practices. Reformers argued that the dance would corrupt the young and called on officials to intervene but Salomania would not be stopped.

In August 1908, actress Marie Cahill took a firm stand against the Salome dance craze that was engulfing vaudeville, musical comedy, burlesque, and other stages across the United States. In a series of identical letters sent to President Theodore Roosevelt, the Presidential and Vice Presidential candidates, Republican Party national chairman Francis Harris Hitchcock, and several other prominent Republican and Democratic party members, she pleaded for help. Declaring that the dance represented the “willful poisoning of that great teaching institution, the drama,” Cahill urged the influential politicians to establish “a commission with powers of censorship over the dramatic stage” in the State of New York. Censorship was necessary, she maintained, in order to prevent “young people,” especially those “who cannot got to school because they must work,” from polluting their minds with the dangerous impressions, “unclean” images, and “vulgar exhibition[s]” of the stage.[1]

“These critics warned that the proliferation of scantily clad Salomes would pollute the bodies of respectable women and corrupt, if not infect, the minds of men and children.”

Cahill was not alone in drawing on discourses of uncleanliness and moral corruption to describe the Salome dance. Other opponents, from ministers to medical doctors, drew on similar metaphors of disease and pollution to characterize the dance and its almost-exclusively female performers. Words such as “epidemic” and invented terms such as “Salomania” appeared frequently in reviews and editorials as the dance moved across the continent via theatrical touring circuits. Though some writers used these terms jokingly, others like Cahill found little humor in the dance’s disease-like mobility. These critics warned that the proliferation of scantily clad Salomes would pollute the bodies of respectable women and corrupt, if not infect, the minds of men and children.[2] 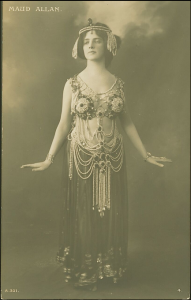 Fig. 1. Maud Allan in costume as Salome. Note the intricate beading on the bustier and the thin gauze skirt. Worn without stockings or fleshlings (body stocking), the costume left little to the imagination. Courtesy of Dance Collection Danse.

Although the Salome dance has roots in the performances of “Little Egypt” at the 1893 Chicago World’s Fair,[3] the 1908 “outbreak” of Salomania arose from the salons and theatres of Europe, where in December 1906 the Canadian-born Maud Allan introduced “The Vision of Salome,” a fifteen-minute solo dance inspired by Max Reinhardt’s 1903 production of Oscar Wilde’s scandalous Symbolist play Salomé.

Though Wilde’s play features the erotic “Dance of the Seven Veils,” a dance Salome agrees to perform for her stepfather King Herod in exchange for a gift of her choosing, Allan’s “Vision” opens after the Biblical princess’s royal performance, when she has retreated from the court to be alone with her thoughts <fig. 1>. Reveling in her victory over the king from whom she has exacted John the Baptist’s head, Allan/ Salome begins to dance slowly, undulating her long arms. But when the severed head of the Baptist appears onstage, her pace quickens. Horrified yet sexually aroused, Salome dances around the head, sidles along the floor towards it, then grasps it and dances around with it in a frenzied manner. 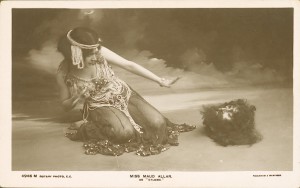 Fig. 2. Allan/Salome leans back in revulsion as she stares at the decapitated head of John the Baptist. Courtesy of Dance Collection Danse.

Finally, overcome by her attraction to the head, she kisses it and crumples to the floor in exhaustion <fig. 2>. This sexually explicit content, with its allusion to necrophilia, combined with Allan’s risqué costume consisting of a beaded bustier and jewel-encrusted gauze skirt, stunned audiences, leading some to call for its censorship. Others argued that there was nothing licentious about the dance, pointing to Allan’s sensitive, artistic exploration of the young princess’s emotional breakdown.[4]

Word of Allan’s Salome[5] reached North America soon after she opened at London’s Palace Theatre, aided by scandalous revelations about her family.[6] In spring 1908, several US newspapers disclosed that Allan’s brother was none other than the infamous “Belfry Murderer” Theodore Durrant, a man convicted and executed for the brutal rape and murder of two women in San Francisco in the late 1890s.[7] Eager to capitalize on the combination of the risqué dance and Allan’s troubled family history, theatre manager Willie Hammerstein and press agent Morris Gest decided that instead of hiring Allan (who was bound to a lengthy London contract), they would send vaudeville mimic Gertrude Hoffman to London to learn the dance and bring it back to the United States.[8]

“Salomania was raging and US audiences in both high- and lowbrow venues hungrily consumed the bodies of dancers representing the passionate, sexually desiring girl, much as they consumed images of prostitution on stage.” 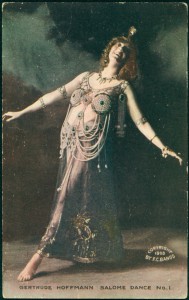 Hoffman’s “A Vision of Salome” opened at New York’s Victoria Theatre in early July 1908 and quickly inspired a host of imitators throughout the United States, from headliners to chorus girls; these women (and a few men) hoped that by embracing the dance and its revealing costume they could grab the Salome spotlight for themselves <figs. 3 and 4>.[9] By July 18, a “chorus girl” speaking to a journalist for the New York Evening World noted that “The only other topic in our set [of chorus girls] is the Salome craze. You can’t book an act now unless you have a Salome dance featured in it in some way . . . straight, imitation or burlesque.”[10] Salomania was raging and US audiences in both high- and lowbrow venues hungrily consumed the bodies of dancers representing the passionate, sexually desiring girl, much as they consumed images of prostitution on stage.

By the time Marie Cahill pleaded with the President and other prominent politicians to intervene, it was too late. As Republican presidential candidate William Taft wrote in his response to Cahill:

While of course I am with every good citizen anxious that indecency upon the stage should be restricted as far as possible, and that the laws of the State should be directed to minimize this evil, it is impossible for me, engaged in a National campaign, to suggest to a party convention in a State not my own the adoption of planks with reference to matters that are completely within the control of the State and are necessarily matters of State police and law.[11]

Fig. 4. Hoffman reclines alongside the head of John the Baptist. Courtesy of Dance Collection Danse.

Though sympathetic to Cahill’s cause, Taft was unwilling to tamper in what he thought was a State matter. Local vice squads did clamp down on the worst excesses of Salomania, warning that dancers who tested the limits of decency with their costumes would be arrested. Still, while these warnings compelled some performers to adjust their wardrobe, they could do little to stem the tide of the public’s fascination with Salome until (like most fads and epidemics) it had run its full course.

Marlis Schweitzer is an Associate Professor in the Department of Theatre at York University in Toronto. She is the author of When Broadway Was the Runway: Theater, Fashion (2009), and American Culture and Transatlantic Broadway: The Infrstructural Politics of Global Performance (2015) and editor (with Joanne Zerdy) of Performing Objects and Theatrical Things (2014).

[2] See, for example, “Now the Daring Salome Dance Rages through the World Like an Epidemic,” The Sun (Baltimore), 30 Aug. 1908, 24. “The Vulgarization of Salome,” Current Literature, 1 Oct. 1908, 437. See also “The Salome Pestilence,” New York Times, 3 Sept. 1908, 6. For a more complete discussion of how the discourse of disease informed critical reception of Salome, see my forthcoming chapter, “The Salome Epidemic: Degeneracy, Disease, and Race Suicide,” in The Oxford Handbook of Dance and Theatre, ed. Nadine George (Oxford UP, 2015).

[5] Allan did not retain the French spelling for her performance.

[6] Scandal would continue to dog Allan throughout her life. In 1918, she sued the British MP Noel Pemberton Billing for implying in an article entitled “The Cult of the Clitoris” that she was a lesbian conspiring against the British with her German associates. Allan lost the libel suit, only to be charged by the state for sexual deviancy. Her association with Oscar Wilde via Salome and her troubled family history seemed to confirm such claims. For more on Allan’s trials see Bentley, “The Cult of the Clitoris,” 47-84.

[10] Roy L. McCardell, “The Chorus Girl Squanders a Bunch of Thought on ‘Salome’ and the Close-Lidded Race Track,” The Evening World, 18 July 1908.

—. “The Salome Epidemic: Degeneracy, Disease, and Race Suicide,” in The Oxford Handbook of Dance and Theatre, ed. Nadine George (Oxford UP, 2015).